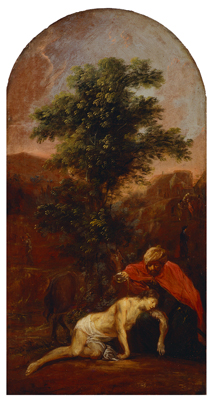 At first glance, it appears unassuming. One of the smallest paintings featured at the “Willmann. Opus Magnum” exhibition at the Four Domes Pavilion. To me, it is most precious, moving and profound.

The Good Samaritan, a late and very mature work of ‘Silesian Rembrandt’, dates to the end of the 17th c. and was painted for the Cistercian monastic Church of the Assumption of the Blessed Virgin Mary at Lubiąż Abbey. Originally it was mounted in an auxiliary altar which, as indicated by an inscription placed on the cupboard below the painting, was used to store ‘sacred fluids’: holy water, oils and sacramental wine used in celebration of the Holy Mass and dispensing sacraments.

The painting illustrates a parable told by Jesus in the Gospel of St Luke (10:25-41) about a traveler journeying from Jerusalem to Jericho who was attacked by robbers, beaten, stripped off his clothes, and left to die alongside the road. A priest passes by, notices the injured man, but does nothing to help him. A Levite likewise remains indifferent to his plight. Finally, a Samaritan comes by. Unlike the other two, he is a complete stranger with no social, religious or kin connection to the victim, but instead of avoiding him, he takes care of the injured man.

When the pillars of society, the respected figures who might have been expected to help, have failed, the victim is being helped by someone who has no obligation to come to his rescue. The Samaritan is moved by compassion and acts on it.

Willmann pictures the Samaritan as he bounds the victim’s wounds, pouring on oil and wine. Supporting the injured man’s tortured and hapless body with his left arm, he is gentle and caring, and hopefully saves the man’s life.  And in the background, we see those who have failed the test of humanity by remaining indifferent and cold.

Willmann reveals the true meaning of love, compassion, and charity. And when he painted the picture, he was likely in pain himself, an old man suffering from arthritis and gout. His mature mastery of the medium is impressive, but we can sense the artist’s personal agony encoded in the painting’s very matter, in his sketchy brushwork which seems hastily applied… but is pure painterly brilliance.