This is the first such a large-scale presentation of artistic work by Magdalena Abakanowicz, internationally the best-known contemporary Polish artist. The exhibition showcases all the works created by Abakanowicz in the collection of the National Museum in Wrocław, which is coincidentally the largest and most representative set of her body of work.

A large part of the collection is made up of pieces gifted to the Museum by the artist herself, who expressly wished that they found their home in Wrocław. The exhibition also includes documentary materials showing her artistic activities in a variety of places around the world over a few decades.

Abakanowicz is presented as an artist focused on studying ‘the human condition’, remaining close to her relationship with Nature, and who used in her unique way natural materials such as sisal, jute, and wood. Thus the artist’s work perfectly corresponds with the current trends of recycling and pro-ecological thinking in contemporary art.

Additionally, the main exposition is accompanied by an educational display, and the especially prepared extensive programme of complementary events, including a guided tour of the exhibition, lectures, workshops and performances – addressed to all age groups and persons at risk of exclusion.

The National Museum in Wrocław is a custodian of the artistic oeuvre of the one of the most prominent Polish artists of the 20th century, Magdalena Abakanowicz, and can boast the world’s largest, and at the same time the most representative, collection of her works. It comprises 53 pieces created by the artist, most of which are multi-element sets of works (in total 393 objects). The Wrocław collection documents the creative activity of Abakanowicz almost from the moment of her debut, up to the works she made in the early 21st century.  They include the famous large-format spatial compositions – the so-called ‘abakany’ – as well as the excellent sets of figurative sculptures in the series Crowd, Backs, Seated Figures, and those unique ones like War Games and Wheel and Rope.

Magdalena Abakanowicz [1930–2017]
One of the most prominent Polish artists in the 20th century, creator of sculptures and artistic fabric works. In 1949–1950 she studied at the PWSSP in Gdańsk, and then at the Academy of Fine Arts in Warszawa. Starting from the mid-1960s, the artist made her monumental fabric compositions, named ‘abakany’, which she first showed at the Textile Art Biennale in Lausanne in 1962. ‘Abakany’, designed as spatial compositions, and in part sculptures, were examples of the innovative and unique way of using traditional materials. During the 1970s, the artist created large figurative compositions, works of organic structure made out of fabric hardened with resin, as well as compositions made of wood, metal and stone, among others the series: Alterations, Backs, Crowd, Embryology, War Games.

Since the 1960s, the art created by Magdalena Abakanowicz  has enjoyed the highest accolade from international art critics. In the new millennium, the artist started to experiment with new materials, using metal panels to build compositions alluding to the animal world (such as the series Birds). She also created plein-air sculptures (stone and metal) in Poland and abroad – in Italy, Israel, Japan, and the USA. In 1992, the jury of the competition on extending the Axe Historique of Paris awarded a project proposed by  Abakanowicz – Arboreal Architecture – which presented her concept of an ecological city. The artist was represented by the renowned Marlborough Gallery, and showed her works at international art events including the Textile Art Biennale in Lausanne (1962–1976, 1985), the Venice Art Biennale (1968, 1980, 1995), the Art Biennale in São Paulo (1965, 1979), and the International Open Air Sculpture Biennial (1983). 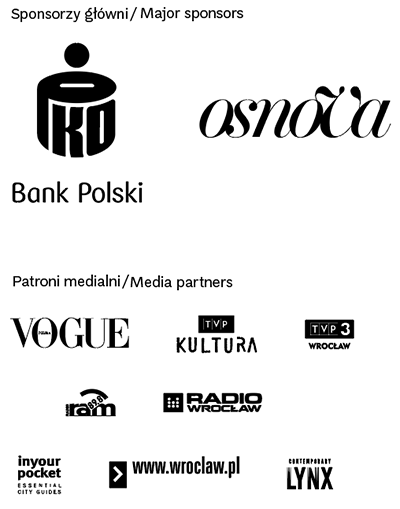