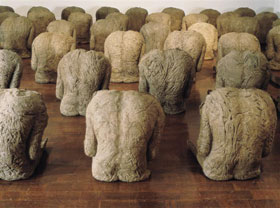 In the mid-1970s, Magdalena Abakanowicz starts making her first series of figurative sculptures: The Seated Figures (1974-1984) and Backs (1976-1980). At this time, she is already an artist of international renown. Her mysterious, abstract Abakans have brought her first international awards and provided opportunities for extensive and distant travels.

During this period, she also meets Mariusz Hermansdorfer, a contemporary art curator and later the longtime director of the National Museum in Wrocław who would gather the largest collection of Abakanowcz’s works in Poland. Today, it takes pride of place in our Museum.
In 1986, the National Museum in Wrocław acquires her two very important works: The Embryology (1978-1988), a piece composed of almost 100 elements, earlier featured at the Polish Pavilion at the Venice Biennale in 1980, and twenty six figures from the dramatic Backs series (1976-1980).

A year or two later, still a high school student, I visit the National Museum in Wrocław. I enter the gallery featuring the works of Abakanowicz and I am awestruck. Breathless and shaken, I can hardly move. It is the first time in my life that an encounter with contemporary art makes such a powerful impression. I know nothing about the artist but I feel the unique energy and totality of her work. At this time, I am not yet aware that this experience will have such an impact upon my future. Several years later I will write my MA thesis on Abakanowicz. Since 2018, I have had the pleasure of working at the Four Domes Pavilion, the contemporary art branch of the National Museum in Wrocław, and looking at her works every day.

The Backs is a series of 80 life size pieces realized in mixed media (burlap and resin), each sculpture rendering a seated human figure, headless and reduced to a drooping back with short stumps instead of legs. The model created to form these figures was also used in other projects realized by the artist, for example in The Cage (1985), which is also in the Museum’s collection.  The Backsseries is open to multifarious interpretations but its appeal and meaning is universal. Its continue relevance is confirmed by Abakanowicz’s decision to revisit the theme in her poignant outdoor installation Space of Becalmed Beings (1993) erected as a memorial to the victims of Hiroshima.

The Space of Becalmed Beings features forty figures cast in bronze. Abakanowicz talked about the installation’s idea in an interview with Ewa Izabela Nowak.

“Six thousand  two hundred forty one citizens of Hiroshima signed a petition to the municipal authorities asking for my sculpture. For them, I created a group of figures (of great personal importance to me): larger-then-life partial figures, simplified trunks, reduced to hollowed backs, headless and armless. They form a permanent installation on the terrace of the Contemporary Art Museum of the City of Hiroshima, located on the mount hovering over the metropolis spreading at its foot. The figures look at the city below. I have been told that people would try to shelter there while fleeing from the hell raised by the dropping of theatomic bomb. And they died there. I have been told that sometimes, during the night, the air seems to reverberate with their cries and moaning. I have been told that the museum elevators sometimes stall between floor for no apparent reason and these sounds are can be heard repeatedly” (Magdalena Abakanowicz, Orońsko, 2013, p. 10).

The Backs by Magdalena Abakanowicz in the collection of the National Museum in Wrocław, remain vocally silent.