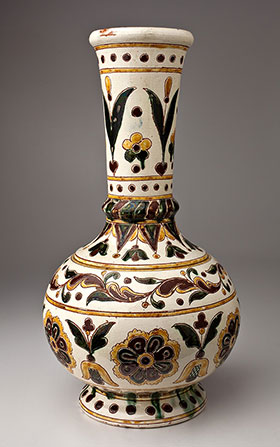 The featured Hutsul vase from Kolomyia (a city located on the Prut River, until 1945 in Poland’s eastern borderlands, today western Ukraine) is one of many objects in the collection of the Ethnographic Museum in Wrocław whose unusual history sheds light on the phenomenon of Lower Silesian culture.

Beautifully decorated, signed and dated 1889, the vase captivates with its exquisite form, color design, and superb craftsmanship. It was gifted to the Ethnographic Museum in Wrocław by Janusz Żurakowski in 2007. The vase’s journey was long and complicated as it led from Kolomyia to the United States to Wrocław. One of Janusz’ sons who had settled in America after World War II inherited the vase there from a friend who had brought it to America. Elżbieta Berendt, director of the Ethnographic Museum in Wrocław, recalls: “In 2007, Janusz Żurakowski visits his family in Wrocław. At the time, he is 85 years old and feels the time has come to make some fundamental decisions and necessary arrangements. He has with him the vase which in the meantime has been brought back from America. Born in Poland’s former eastern borderlands, he regards the vase as a precious object of great sentimental and artistic value. He wants it to remain in Poland and decides to donate it to the Ethnographic Museum in Wrocław in honor of his late mother Paulina Żurakowska”. (E. Berendt, Lwów jest wszędzie. Muzealne terytoria kultury, “Etnografia Nowa” 2009, nr 1, p. 22–23).

It is its history, recorded by the Museum probably at the last opportune moment, that enhances its artistic, ethnographic and material value. We know that its previous owners cherished it, that it brought back the memories of bygone past and images of theirlost homeland. Significantly, the vase final arrival in Wrocław corresponds to the journey made many decades earlier by many residents of Poland’s former eastern borderlands who resettled to Lower Silesia in and after 1945. Without its history, the vase would have been an anonymous object.

Dorota Jasnowska, Keeper of Ceramics, Department of Folklore at the Ethnographic Museum in Wrocław