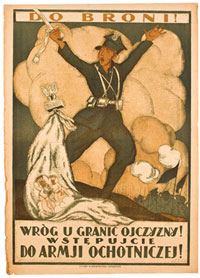 The National Museum in Wrocław boasts an impressive collection of political and patriotic posters, related mostly to the Polish-Soviet war fought in 1920. The collection was gifted to the Museum by Professor Marian Morelowski (1884-1963), prominent art historian, Keeper of the State Collection of Art at the royal castle of Wawel in Kraków (1926–1929), Associate Professor at the Stefan Batory University in Wilno [after the Second World War Vilnius in Lithuania] (1934–1941) and Associate Professor at the Catholic University in Lublin (1946–1952), later also Professor and Head of Department of History of Art at the University of Wrocław (1953–1960).